Geology and geography can be quite tricky subjects to write essays or research papers for. Narrow topics, specific terminology, and structure issues could make any student's writing process a real hell. If you're committed to crafting a piece on your own, it might be useful to have a look at the research paper sample about the history of the continents below. But if you wish to avoid the nerve-racking experience of writing, rewriting, deleting, and writing again, you might want to consider getting professional essay writing help online from our experienced and degreed authors.

Formation and History of Continents

The history of the Earth’s crust can be inferred from various ancient rocks and regions spread across the globe today. Several lines of evidence are used, such as the structure of minerals and rocks, the rock strata, etc. The similarity of structure across geographically separated regions can be seen as evidence of contiguity in the past. Paleomagnetics and geochronology have also been used to establish relationships between ancient rocks.

This is a brief chronology of some of the events in the formation of the Earth’s continents.

The Earth for formed about 4.56 billion years ago. There is evidence for liquid water as early as 100 million years after its formation, implying that the surface had already cooled down sufficiently and a crust existed. The crust was highly unstable and transitory, being constantly remelted by both the Earth’s own geological activity (sinking of the crust into the molten magma below), as well as continual bombardment from asteroids and comets.

Over a period of time, as the re-melting/solidifying process slowed, some parts of the crust began to persist. These contain some of the oldest rocks in existence today. These persistent parts of the crust followed a turbulent history, sometimes uniting with other such parts to form large landmasses, which then broke apart to send the pieces drifting again. Most of those that survived are part of ancient cratons. Cratons are thick parts of today’s continental plates, which have accumulated material from older continents and grown very thick. Technically, a craton has survived at least half a billion years of continent formation/breakups. They are the stable interior parts of many of today’s continental plates, and the crust below them is very thick, extending up to 200 km into the mantle. Cratons typically grew by process of accretion, where lighter materials from below (felsic rocks such as granite) drifted upwards and aggregated.

As the continental plates collide and then eventually break up and drift apart again, parts of one plate can become attached to another and drift away with it. Such fragments are called terranes; they are an important indicator of lateral movements in the Earth’s crust and provide evidence from which the movements may be deduced.

Here is a list of some of the ancient continents that existed in the history of the Earth. Note that these are not universally accepted facts. Trying to reconstruct continents of such an age is a matter of conjecture. There is some evidence, but it is by no means conclusive.

Yilgarn is a large craton which forms the bulk of the Western Australian landmass. Most of this craton formed around 2.94 billion to 2.63 billion years ago, but it contains much older parts originating in terranes which pre-dated it significantly. The Narryer Gneiss Terrane, for example, dates from at least 3.3 billion years (and possibly as old as 3.8 billion years). Rocks much older than that have largely been destroyed by weathering, but certain minerals such as zircons can survive for very long times. The oldest known zircons are from the Narryer Gneiss Terrane in the Jack Hills. A detrital zircon found at Eranondoo Hill was dated to 4.404 (+/- 8 million) billion years old.

Interestingly, the oxygen isotope concentrations in this zircon indicate that it was formed in the presence of liquid water. This is evidence of the presence of liquid water on the surface of the Earth during the Cryptic Period of the Hadean Eon, about 150 million years after the formation of the Earth. No rocks of this early date exist, but we know that the crust had begun to form probably within the first 100 million years of the Earth’s existence.

The first theorized supercontinent from the Paleoarchean, about 3.3 billion years ago, possibly 3.6 billion years. Note that “supercontinent” in these old days doesn’t mean “huge continent”. Vaalbara was probably no bigger than Australia is today. It’s called “supercontinent” just because it was the biggest landmass around. Most of the Earth was the ocean with scattered islands.

Vaalbara is a compound word, derived from two Archean cratons: the Kaapvaal craton in South Africa, and the Pilbara craton in Australia. There is paleomagnetic as well as geochronological evidence that these two cratons were once connected. The greenstone and gneiss belts of these regions also show a structural similarity. This early “supercontinent” started to break up around 2.8 billion years ago, and the two cratons were well-separated by about 2.78 billion years ago.

One of the earliest continents, hypothesized by John Rogers at UNC Chapel Hill. Rogers was studying the geology of Southern India in the late ’80s, around the time when many of the world’s ancient cratons were first being accurately dated. He noted that the South Indian craton was around 3 billion years old, and if you tracked its movement back to when it was part of Pangaea, it was surrounded by a number of other cratons, also dating back 3 billion years. It was too much of a coincidence to expect cratons of a similar age to just cluster together in the same region of Pangaea unless they were in fact related. Rogers hypothesized that these cratons were, in fact, part of an ancient 3 billion old continent, which he named Ur, that survived billions of years until it finally broke up with the breakup of Pangaea.

According to Rogers, Ur was formed about 3 billion years ago. For the first half billion years of its life, it was alone as the only continent-sized landmass (though very small by today’s standards). It grew slowly through volcanism, accretion, and by collecting terranes from other small cratons that it bumped into. Around 2.5 billion years ago, the next continent appeared: Arctica, which was composed of parts of what are today Canada, Greenland, and Siberia. After another half billion years, roughly 2 billion years ago, two more continents appeared: Baltica (western Europe) and Atlantica (eastern South America and West Africa). Today, the remnants of Ur are scattered between South India, Australia, Madagascar, and South Africa. 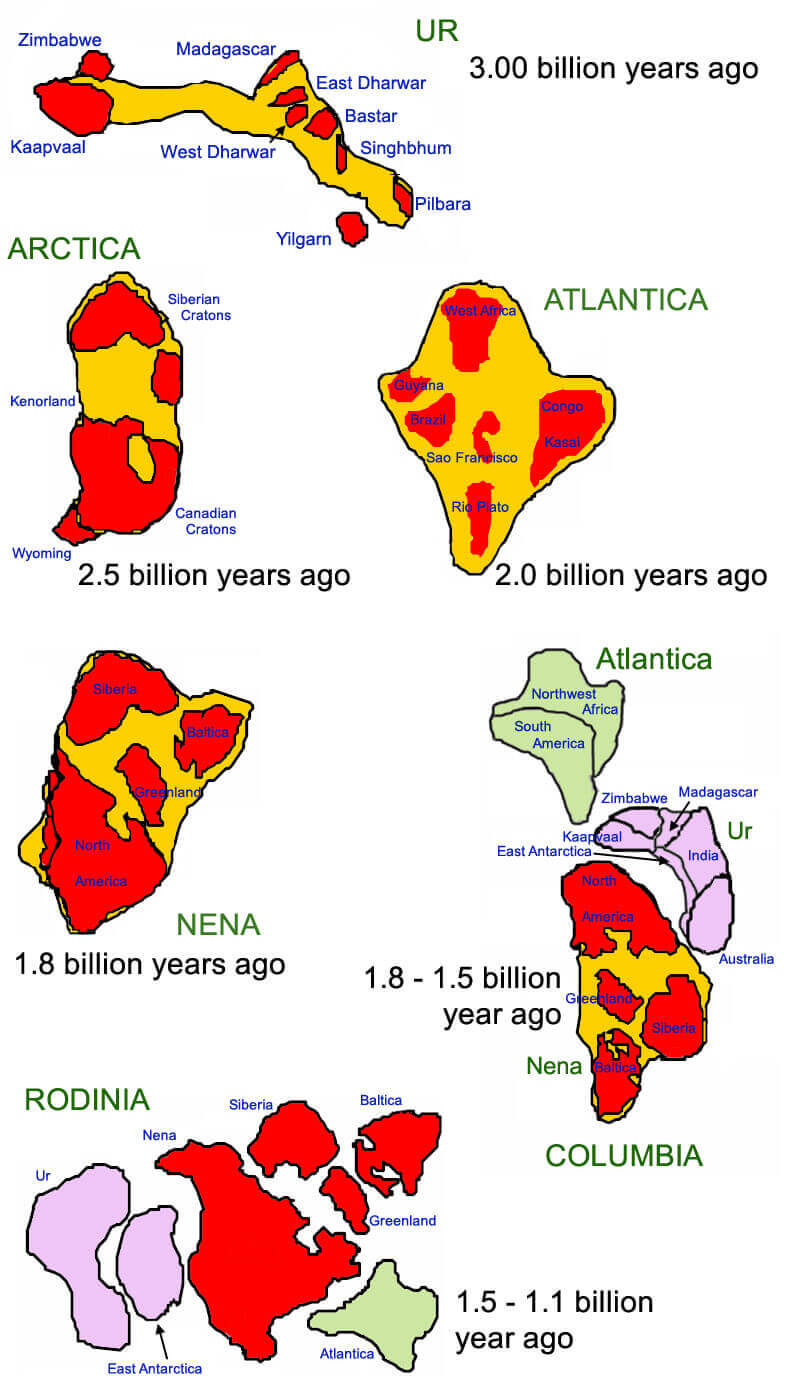 Arctica was formed around 2.5 billion years ago, from the cratons of the Canadian Shield (also known as the Kenorland continent), the Siberian cratons, and the Greenland and Wyoming cratons. It was roughly situated at the current North Pole at the time, hence the name.

Atlantica was formed around 2.0 billion years ago, in the area that is now the Southern Atlantic Ocean. It was composed mainly of ancient cratons in what are now West and Central Africa, and North Eastern South America (Brazil, Sao Francisco, and Rio Plato cratons).

This was the first real supercontinent, formed roughly between the period of 2 – 1.8 billion years ago. This included Ur, as well as Nena, Arctica and Atlantica. It started fragmenting about 1.5 billion years ago. Some of the evidence for Columbia includes:

Columbia started fragmenting between 1.6 and 1.4 billion years ago, with the separation of Atlantica from Nena.

The fragments of Columbia re-assembled around 1.1 – 1.0 billion years ago as Rodinia. Several configurations for Rodinia have been proposed, and the matter is still not settled. Pictured above in the figure is one commonly proposed configuration. Most of Rodinia’s land mass was south of the equator. Rodinia was surrounded by a super-ocean, named Mirovia. Rodinia started to break up around 800-750 million years ago, beginning with its northern part.

The period following the breakup of Rodinia is the era of the modern continents and is much better understood.

So what you're gonna do now? Fight a losing battle with time, sleep, and lack of inspiration while trying to write a piece yourself or get geography and geology help in order to accomplish the task on schedule and with minimum effort? Professional assistance is just a click away!

If you want a unique paper, you can have one of our writers create it for you

This paper is created by writer with
ID 1937

If you want your paper to be:

Original, fresh, based on current data

If you don’t believe your paper has what it takes for a great grade, check out our samples for inspirations. Still cannot come up with something good? Hire a writer here!

Academic Essays Database Has All You Need to Succeed

×
Don't Go!
Get -11% Off today for any essay!
Enter a discount code
LESSISMORE
Order Now